Statues of historical figures including Captain Cook should be torn down unless their negative traits can be displayed alongside them, academic declares

Controversial statues of Captain James Cook should be torn down in unless the negative attributes of the British explorer are clearly displayed alongside them, an academic has claimed.

He suggested plaques be added to the monuments to highlight their negative traits and give a full account of their deeds – and if not, they be removed.

Mr Gabriel-Jones questioned why a statue of Captain Cook was ever erected in St Kilda, telling the Herald Sun: ‘He never came to St Kilda or anywhere near it’.

‘I wish there was some way of using that statue as an introduction to a discussion of all the complexities that go with the celebration of Cook,’ he said.

He said while Fawkner was regarded as a ‘major hero, and a person to be revered and celebrated’ he was also ‘viciously anti-Chinese’ [and] a total racist.’

The public land expert argued Fawkner Park should remain named after the pioneer, but that it should serve as a history lesson about the complexities that go with the legacy of him.

Mr Gabriel-Jones, who is founder and principal of The Public Land Consultancy, said putting ‘a dozen words on a brass plaque’ was not enough.

He also mentioned the State Library forecourt statue of Redmond Barry, a colonial judge who is best known for ordering Ned Kelly’s hanging.

‘His faults, and they were many, related to sexism and women. But then, it’s a fact that he defended a couple of Aboriginal people accused of murder,’ he said. 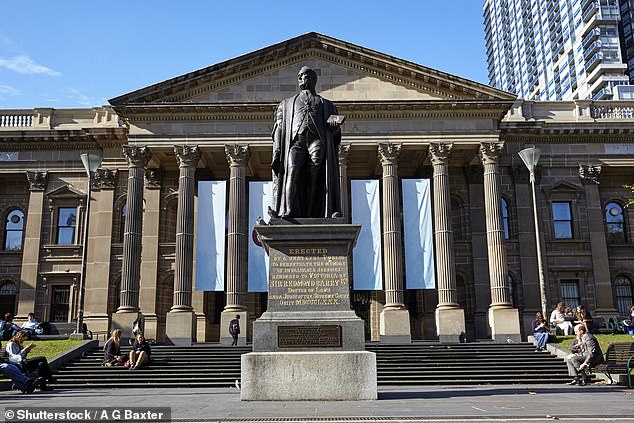 Mr Gabriel-Jones said he supported leaving the statues as they are but with special notices that give full context to the history of the individual.

‘If it turns out to be impossible, then knock ’em down,’ he said.

Earlier this year, the Captain Cook statue was vandalised ahead of Australia Day celebrations, with the 7m high statue sprayed in bright red paint.

The monument in St Kilda in Melbourne’s southeast was covered in the paint and plastered with protest signs.

One demands: ‘Why should we abolish Australia Day?’

It adds: ‘So-called Australia is built on the genocide of Aboriginal people.’ 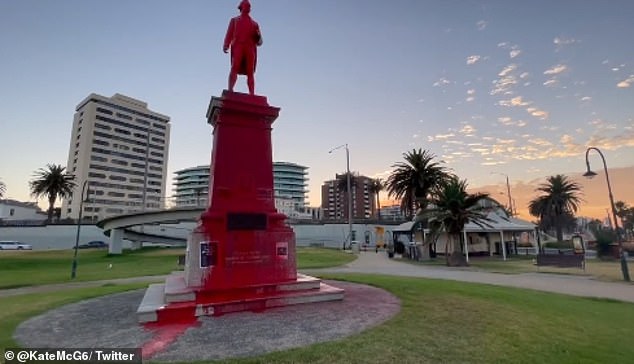 The vandals sprayed painted over the whole the statue, standing around 5m high, covering it from head to toe, before its plinth too was also covered in paint.

Many of the protest signs have also been covered in the paint by the attack.

Port Phillip Mayor Marcus Pearl condemned the attack, and added: ‘It’s disappointing people have decided to do this.

‘We had a beautiful ceremony a few hundred meters away from here.

‘People are well within their rights to show their views but we would have hoped they’d done in a better way this morning.’