If you’re on the fence about filming a TIkTok at your wedding, why not take some inspiration from a viral video some netizens are calling the best ‘WeddingTok’.

A Singapore couple surprised their guests and amused the internet when they broke into a dance to the trending Jiggle Jiggle song, right in the middle of their wedding at a Collyer Quay restaurant.

The adorable moment was captured by a guest, who goes by Justinswarley, and shared on TikTok last Sunday (June 19).

The newlyweds were walking down the aisle when they came to an abrupt halt.

“At this point, I was so confused,” Justinswarley wrote in the video.

Meanwhile, the pair donned sunglasses.Turning to face each other, they clasped their hands together before breaking into the dance routine.

In the 40-second clip, the wedding guests could be seen applauding and cheering at the couple’s unexpected dance performance.

First performed by British-American journalist Louis Theroux in 2000, the Jiggle Jiggle rap went viral after an autotuned remix version was shared on TikTok on March 17.

After Theroux’s vocals were used in a dance routine a month later, more than 6.2 million TikTok users – including members of Blackpink – have since joined the Jiggle Jiggle dance challenge.

In the comments of Justinswarley’s video, several netizens were impressed with the couple’s spontaneity, with one calling it the “best WeddingTok”.

Several netizens were also amazed that the dance routine has captivated not only the millennials, but also the older wedding guests.

Several other netizens were also amused by the reactions of the couple’s older guests. 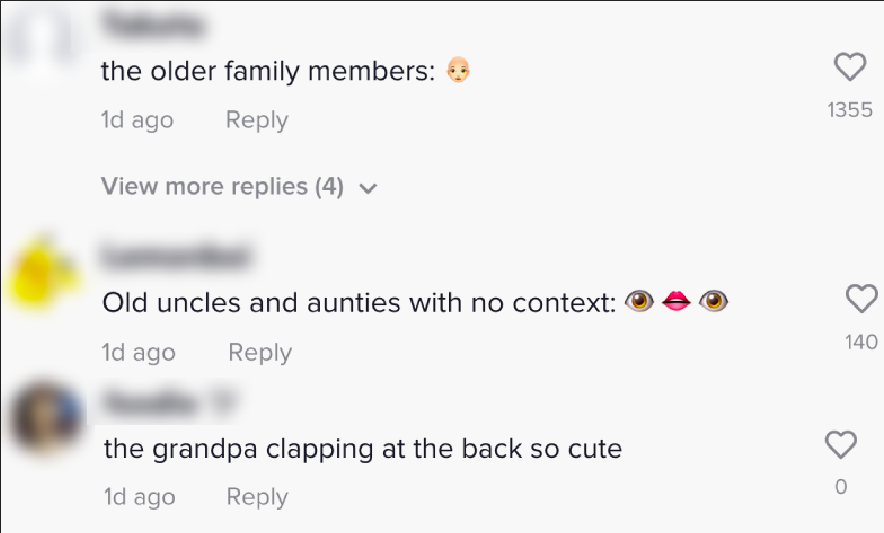 While they’ve certainly had the warmest reception from netizens, the newlyweds aren’t the only ones to celebrate a wedding with the TikTok dance challenge.

One couple even chose a scenic background, performing the dance routine at Jewel with their bridesmaids and groomsmen.

Singer Esther Lo also hopped on the trend with her cousins.